Two of my paintings for are for sale locally in Austin only. I am asking $300 for each one. The first one is untitled but let's call it Bull and Butterfly Spirit, it was inspired by reading The Language of the Goddess by Marija Gimbutas: 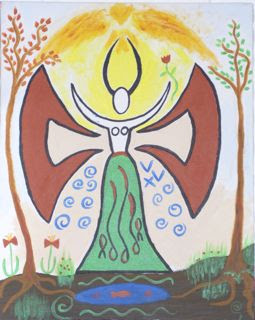 The second one is titled Man of Earth, it was originally inspired by Riane Eisler's book The Chalice and the Blade: 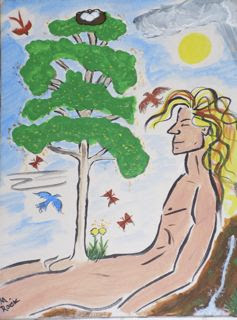 Both were painted in 1997 not very long after I had taken a walkabout in Santa Fe in October 1996 which was the original wellspring of that period of creativity.
Contact me if interested, they are unframed but have hangers.
Posted by Mike Rock at 7:25 PM

Dude, these images are gorgeous! Did you ever sell them? I would SO be interested in the Gimbutas inspired one, or perhaps a print if you digitzied them??? I am in California and walk the path the Old Ones and follow a Goddess centered spirituality that encompasses the energy of both the God and Goddess. Would love to see any of your new work. I hope you are still painting!